The saga of Princess Sparkles

Many of you will remember my pony Princess Sparkles, who hurt her leg a couple years ago and has been lame since. It is with a heavy, broken heart I must report that Sparkles has lost her battle to live.

Her injury became more burdensome to her and as result, I had to have her put down. And worse, with her went my special needs pony Little Thunder. You guys probably remember her as well. She was born February last year and her mother Jewel abandoned her after a month and a half. I bottle feed her and put her in with Sparkles, but as time went on, her condition deteriorated. The vet decided she didn't have long, and without Sparkles her life would be a lonely misery. They were put down together and lie at rest together. Losing them both has been nothing short of gutting. Their empty pen is a constant reminder of them.

I hate to come with bad news, but everyone was so supportive when she was injured, I thought you all deserved to know that it is over. I feel like I gave Princess Sparkles a few years she wouldn't have had otherwise. I hope I did the right thing. She seemed content. She went out with her little Thunder at her side. I can't think of what else I could have done.
I don't think, therefore I'm not.

I am so sorry foofoo. That is terrible news. I am sad reading it. I imagine them both running on rainbows they deserve the very best the rainbow bridge has to offer. You did a fine job trying to give them the best life and a chance. I have no idea the heartbreak. I have never owned a horse. My grandmother had many. Nothing would stop her from saving a horse even if it wasn't her own. You have my deepest sympathy.

I'm so very sorry. I can't imagine how heartbreaking it must be to lose two pets.

I am so sorry Bunny. I lost my horse a long time ago and its very hard to lose such awesome friends like them. I am glad they are not hurting anymore I think you did the right thing. HUG! They both prob had the best time they could and you gave them a great home.

I am so sorry. It's hard losing a pet, harder to lose two, and then at once...

It sounds like you loved them very much and they had a great home.

All I could do is tell them they were going to go to sleep, and when they woke up, they would be together and neither would be in pain and they could run all they wanted. I have a lot of guilt. If I had just let nature take its course, Little Thunder wouldn't have passed these months going downhill. But I couldn't stand by as her mother left her to starve either. I understood rationally that the baby wasn't viable, and Jewel was doing what she had to, but my heart wouldn't let me do what was right. I have had awful luck with ponies lately. My first foal of the season was premature and didn't last a day. But then the next two born are so healthy and lovely... Nature is just cruel. I know they don't all make it. But I want them all. Guess it's my fault for being greedy maybe.
I don't think, therefore I'm not.

I'm so sorry foofoo!
Our hugs and thoughts are with you.
Dream list
http://www.mlptp.net/index.php?threads/taks-dreaming-list.110734/
Thanks to mustbejewel for the amazing avatar.

So many hugs to you all! You have always been here for me, pony friends. I'm sorry I'm so scarce sometimes. I do my best and will try harder to be around!
I really do love you all.
I don't think, therefore I'm not.

While I wasn’t around for your previous post but I am completely gutted for you. Nothing hurts more than loosing an animal friend and loosing two at the same time. I can’t even imagine. Sending you hugs and love and some little sweet Clover kisses. 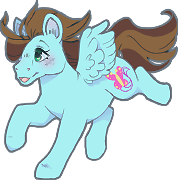 Big hugs to you, Skybreeze!

It's been tough, but I trying to hang in there. I was in their pen and didn't cry today, so I think I'm making progress.
I don't think, therefore I'm not.