Anyone have any suggestions for some good ghost story/supernatural movies?
I've seen The Conjuring and The Sixth Sense, Ghost and The Others.
So, got any suggestions for me? They don't have to be super well known, as long as they aren't full of horrible acting.

I personally hat horror & ghost story films (i'm a big scardy cat lol)
But this one is actually really good did freak me a few times but as I said I'm a scardy cat haha & because I studied it at school it was really interesting to know how they filmed it. All their reactions in this film are real the only scripted scene is the last one
LOLLIPOP
https://www.etsy.com/uk/shop/QuTeas- Click on Vintage Toys for Ponies

What Lies Beneath. That movie is super spooky.

Umm... hmm... Bill & Ted's Excellent Adventure xDD (Okay that's not really about ghosts, but people time travel from the past who have been deceased so it's strange enough when they appear in the "present time" modern society... <.<)
Customs for sale click here:

Commission status: CLOSED DUE TO COVID-19 PANDEMIC, WILL OPEN ONCE PANDEMIC IS OVER
D

Do you want only Ghost-type stories, or are you interested in other horror movies?

For ghost stories, I recommend "The Ring" and maybe "Art of the Devil", which is a ghost story from Thailand. Oh, if you wanted ghosts mixed with history/war, try "Outpost". A team of mercenaries encounters old Nazi tech and Things that are Not Dead in an old bunker in Yugoslavia. Violent but very scary. One more I just thought of, "The Last Winter". A team of scientists encounters ghosts at a research station in the Arctic.

If you like other kinds of horror like Zombies and monsters, I could recommend a lot of things.

LightningSilver-Light said:
Umm... hmm... Bill & Ted's Excellent Adventure xDD (Okay that's not really about ghosts, but people time travel from the past who have been deceased so it's strange enough when they appear in the "present time" modern society... <.<)
Click to expand...

Lmao :LOL: I do like that film though hehe
LOLLIPOP
https://www.etsy.com/uk/shop/QuTeas- Click on Vintage Toys for Ponies

Here's a link. Hopefully this will help you out!
List of ghost films - Wikipedia, the free encyclopedia 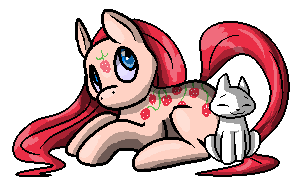 The Haunting of Julia (also known in the States as Full Circle) is a particularly good ghost movie about a young mother who has lost her daughter and moves into a home haunted by a potentially evil girl. It's from the mid 70s and beautifully filmed.

Devil's Backbone, produced by one of my favouries directors Guillermo Del Toro is the story of a haunted orphanage during the Spanish Revolution. It is stunningly filmed in a tense gothic style, acted by incredibly talented cast and has a heartbreaking, but worthwhile ending.

The Orphanage, also from Guillermo. The woman moves into the orphange she grew up in with her husband and son, only to have the boy mysteriously vanish.

Stanley Kubrick's The Shining is a fine ghost story, impeccibly acted by an incredible cast. Jack Nichols, Shelley Duvall and Scatman Crothers all make this an eerie, memorible film about hauntings, isolation and madness.

The Haunting. 1963 I think. Robert Wise directs a taunt thriller as he weaves the tale of a group of psychics and parapsychologists who explore a haunted mansion. This film was remade and sequel-ed, but never topped.

(David, did you get to check out the new sequel to Outpost 1 and 2? It's surprisingly good!)
I don't think, therefore I'm not.

Thanks to Philly for my adorable Minty avatar!
D

I didn't know that there was a sequel to "Outpost"! Excellent, thanks!

DavidC said:
I didn't know that there was a sequel to "Outpost"! Excellent, thanks!
Click to expand...

Well, it's a 'prequel' really. It goes into the experiment in its infancy. Really good.
I don't think, therefore I'm not.

if you want to see a decent classic suspense movie. try the original bad seed. from the 1950s. i love old horro movies where they never show murders

The Woman in Black is a great ghost movie. Full of suspense and creepiness without blood and gore.

DavidC said:
Do you want only Ghost-type stories, or are you interested in other horror movies?

Sure, I love zombie movies and creature features.
D

For Zombies, there are always the George Romero classics, "Night of the Living Dead, Dawn of the Dead", etc. I enjoy the "Resident Evil" series, they are not a lot like the games, but they're fun. The remake of Dawn of the Dead, with Ving Rhames, is excellent.

For really scary, I like the first two "Hellraiser" movies. Probably the scariest movie, for me, is "The Exorcist".

For monsters, I like the classic "Bride of Frankenstein", the Hammer versions of Dracula from the 60s, and some of the other Hammer horror films. The original "Godzilla" is actually disturbing, not at all like the monster-stomp movies they became later.

The house on Haunting hill is a good one and i totally agree 100% on What lies beneath signs is a freaky one 2 even though it involves aliens so is The Fourth Kind. It also has to do with Aliens but just plain freaky:LOL:
You must log in or register to reply here.
Share:
Facebook Twitter Reddit Pinterest Tumblr WhatsApp Email Share Link
Top