Help Me Pick A Name!

Honeysuckle is the reason I started collecting older ponies. I found her while thrifting a few years ago, went online to identify her, and never went back. She's also the only pony from my original collection I still have.
What I'm getting at is she's very special to me.
However, she was in pretty rough condition: There was nail polish over her symbol so old it couldn't be removed, her hair was unfixable, etc. So I decided to customize her. I painted her all brown, gave her an ugly symbol, and hot glued sequins on her for hair because I couldn't get about half of her hair plugs out.

Anyways, she sat in a box for a year.

Until about 6 months ago when I decided to redo her. I hadn't sealed her, but I also didn't have any acetone, and y'know, couldn't go out to get any 'cause of covid, so to get the paint off I used a new method I came up with, which I like to call the spit and toothpick. 1) Yes, it's exactly what it sounds like 2) No, I would not recommend it, and 3) It's actually useful around the eyes and symbol to get off acryllic paint without taking of the factory paint. So after 3 days of slowly chipping off the paint. (And washing it) I managed to get all the hair out when It came out with the hot glue when I peeled/ripped it off. Not having a rerooting tool, I used a combo of toothpick, small crochet hook, and small sewing needle to reroot her with yarn hair.
I gave her a dress from one of my favorite barbies growing up, glued some bows on her, and called her done.
I tried to give her a winter vibe, with the swirly blues and maroon hair, but I don't think that's what the end result looks like. I might give her a more wintery skirt one day and a 3d-snowy cutie mark-one day, maybe.
So that's how I put a ridiculous amount of effort into a simple custom. 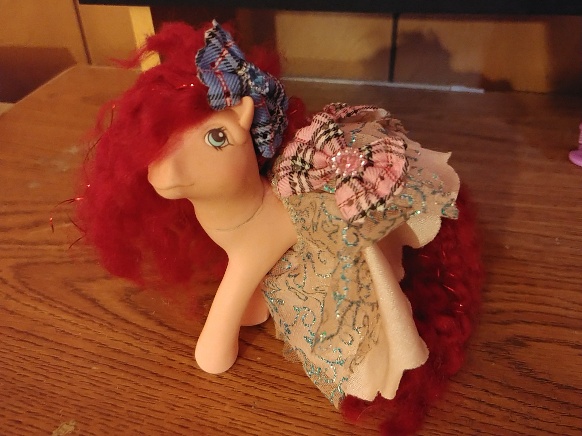 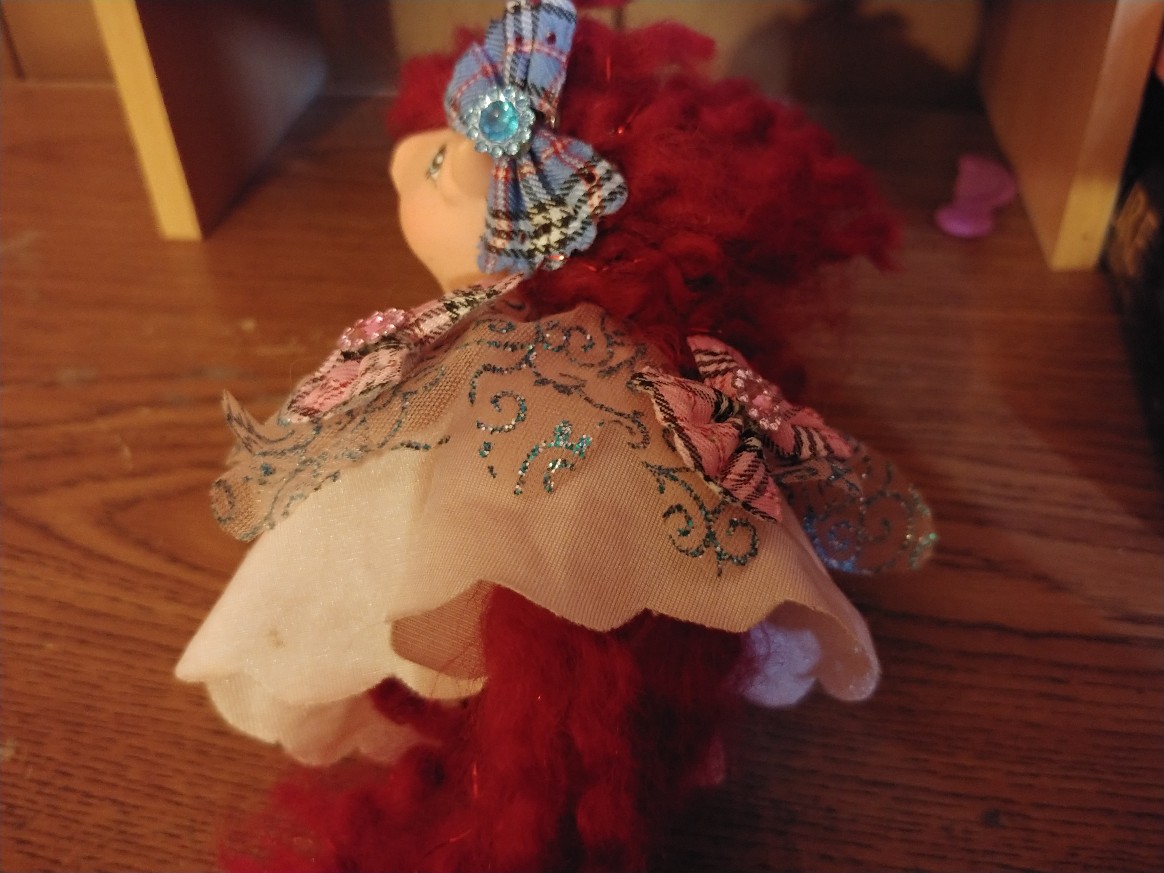 I brainstormed on her name for awhile, but nothing I came up with was 100% satisfying.
Then I realized- she's the pony I've had the longest, she kickstarted my older gen collecting, and I put a disproportionate amount of time into her! She's so sentimental to me. And I realized I could make her even more so by taking her name from off here! So...maybe help me out? Leave some name ideas? And I'll pick one!
Sorry for making y'all read such a long post.

She looks lovely and fancy! Great job on her! She feels more like she has a spring/summer/autumn vibe instead for winter to me, like a costume drama with tea parties in the gardens
I’m not sure on a name but I think it could be Honey something, like her original name?

She's so fancy! I love the hair.
Dream list
http://www.mlptp.net/index.php?threads/taks-dreaming-list.110734/
Thanks to mustbejewel for the amazing avatar.

Something about her gives me 50s vibes but like, a fancy lacey version. Very pretty sorry I can’t come up with any good name ideas though

Cyndi... 'cause "girls just wanna have fun". lol
Dream list
http://www.mlptp.net/index.php?threads/taks-dreaming-list.110734/
Thanks to mustbejewel for the amazing avatar.

Oh, I like Cyndi! I was gonna say Tiffany, she looks fabulously 80's to me and Tiffany just popped in my mind. AzaleaArt said:
Something about her gives me 50s vibes but like, a fancy lacey version. Very pretty sorry I can’t come up with any good name ideas though
Click to expand...

Lacey would be cute.

Leave a Whisper said:
Lacey would be cute.
Click to expand...

Gingerbread said:
Oh, I like Cyndi! I was gonna say Tiffany, she looks fabulously 80's to me and Tiffany just popped in my mind.
Click to expand...

Those both sound very fitting too, especially Tiffany