I'm honestly SO relieved that they're going with a new cast. My biggest gripe with G5 was the thought of the Mane Six being reused for another swath of the same toys

Skybreeze said:
I have a gut feeling it’s going to be like the Hello Pinkie Pie shorts that they’ve been posting. I’ve seen a lot of improvements on the rigging on the animation and suspect if they’re testing the waters with it.
Click to expand... 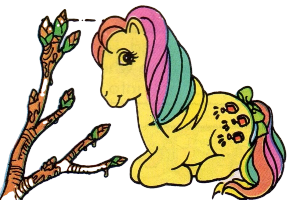 Some of the 3D animation looks good, but some of it looks like crap.

It all depends on whether they rush it or not that determines if it looks crap or not.

Skybreeze said:
I have not seen the new Thunder Cats and this makes me want to avoid it now. :/
Click to expand...

It should be burned with fire. Run from any mention of it!

So bad.
I don't think, therefore I'm not.

The CLEANSING FIRE will save us from that horrible show!

Mia and Me isn't too terrible, so maybe it'll be like that. I prefer a more traditional animation over 3D, but Made 4 Entertainment did a decent job with it. If you're unfamiliar with the series, it has real life acting at the beginning and ending of each episode. The main body of the episode is done in 3D animation in a magical world of fairies and beautiful horsies--ahem--horses. ^_^;;

So is possible that neither of 6 mane six will be main characters,at the end could appear just as background ponies,after all also a Gusty is mentioned in G4 and surely she isn't the only one.
About G5 I had read that Twilight would have been a pony earth but her studies could give her strong knowledge of magic. It was a fascinating concept but maybe a new cast is the best approach if we want to avoid an unofficial reboot of Manes six.

ActionHank said:
The CLEANSING FIRE will save us from that horrible show!
Click to expand...

Nothing can save us from that horrible show. XQ

Leave a Whisper said:
Nothing can save us from that horrible show. XQ
Click to expand...

Kay. But what's gonna save me from my flaming buns?

I got a first aid kit recently and it has some burn ointment in it you could use, or we could get a fire extinguisher from somewhere and use that.

ActionHank said:
I got a first aid kit recently and it has some burn ointment in it you could use, or we could get a fire extinguisher from somewhere and use that.
Click to expand...

He's ready for the zombie apocalypse now. He just needs some leather chaps.
I don't think, therefore I'm not.

I thought all I needed was a spear and magic helmet?

The mighty Chaps of Cheeks?

Does this mean that Pony Life has flopped into a horrible death already?
Customs for sale click here:

Pony life was a sugar rush hype mess especially the advertisement “Feeling good as hell.“ this is not even a kid friendly song.

cat ponies were horrid. Granted some here might like them and I respect you for your love of the Cat Pony.
however the pony life series made my eyes bleed. Barf very choppy at times. after The first episode click and trot away.

I love Lego Ninjargo.. however that series was slick smooth and fun to watch even funny at times. However even Lego decided a new move on the Monkey Kid and Gasp I love this slick cool creative art style.


if their CGI is that Horrid Hello Pinkie I'm Not bothering. the play doh series made me felt like they were trying to get a chunk of the fans of playdoh watchers attention. It was meh but did not make my eyes bleed.

new cast I’m cool, with that. Thank the fudge no recycle ponies from old brands. But that’s not going to stop hasbro from unleashing a new wave of clones from the reboot.

it All boils down to two things

the new fresh look of MLP G5
and the story

who Knows. This I know I will tune in. If I like it I’ll watch it. If not click and trot away.
one thing I do know the only toy worth my dollar is the G1‘s the rest are shameless reboots or tweaks of the same toy.